They don’t call it the “Mighty Mississippi” for nothing. From Lake Itasca’s trickling overspill in Minnesota, the Mississippi travels the length of the continental U.S., growing as it flows for 2,300 miles until it empties into the Gulf of Mexico with waters added from tributaries in 31 U.S. states.
The Mississippi is at the core of American heritage, and is often also referred to as “America’s backbone.” It’s also the country’s heart and soul, and one of the most epic river routes in the world. No wonder the popularity of Mississippi river cruises continues to grow.
In the spring of 2022, the United States Postal Service recognized the continuing allure of America’s greatest waterway and “quintessential highway” in a new stamp collection called the Mighty Mississippi. Each of the 10 photographic stamps in the portfolio represents a state along the course of the river.
And one of them – the Iowa stamp - features American Queen Voyages' American Queen steamboat near the city of Bettendorf. The honor also marks American Queen Voyages' 10th anniversary of sailing the Mississippi River.
At the ceremony dedicating the new stamp collection, the master of ceremonies was the cruise director of American Queen voyages, and John Waggoner, founder and chairman of American Queen Voyages joined USPS chief postal inspector, local mayors from along the river, historians and pastors, were also on hand to inaugurate the collection and note its significance.
“Travelers have been captivated by the Mississippi River — romanticizing the steamboats transporting them from Minnesota to Louisiana — throughout history,” said Waggoner. “Our flagship American Queen is an iconic symbol of those mighty paddle-wheelers, and we are honored to have her grace the collection.”
The American Queen may be the perfect existing river cruise ship to symbolize Mississippi river cruising. At 400 feet long and nearly 90 feet wide, it’s the largest paddlewheel steamboat ever built. Her ornate, historic design, complete with bright red paddlewheel, fluted stacks and curlicue woodwork harkens back to the “romanticized” early days of Mississippi riverboat travel. That’s no accident.
“What we try to do as philosophy is keep things like it was in the 1900s. This is just how it was when Mark Twain was onboard,” Waggoner has said.
“We want you to experience the thump-thump-thump-thump-thump of the paddlewheel. We want you to stand on the stern. We want you to get muddy Mississippi water spraying your face, and we want you to sit in a rocking chair, and watch the river go by and relax.'
Other stamps in the collection highlight top destinations – and incredible diversity of travel experiences – along the length of the Mississippi. 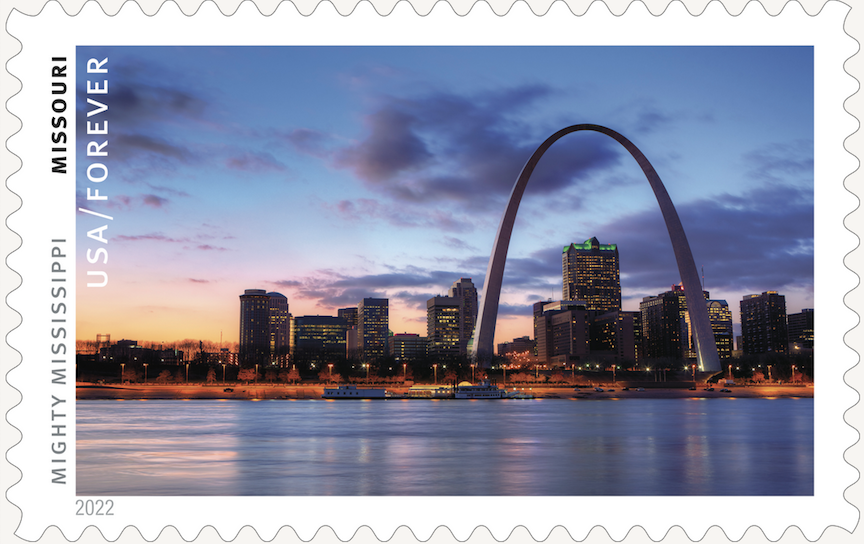 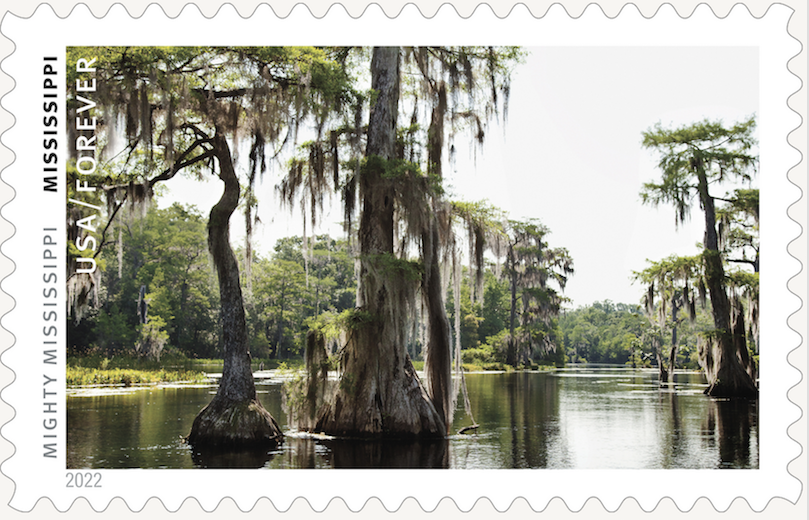